Most parrots have two pigments that produce color. Melanin is responsible for darker colors, like blue. In cockatiels it shows up as grey. Carotenoids are responsible for orange/yellow/red hues. (Click here to learn more about bird pigmentation.)

Color mutations occur when a gene for producing a specific pigment is turned off, cranks up production, or causes a change in the way pigments are distributed. In the wild, mutations can be deadly if they cause a particular bird to stand out more to predators. However, if they are advantageous the bird will survive and pass along its genes for that mutation. In captivity, breeders will try to isolate any new mutations so that more birds with that color can be produced. Rare color mutations typically cost more. Some colors, although not rare, are considered highly attractive and that will also drive up their price.

Body is grey with white on wings and orange cheek patches. Hens and juveniles have yellow barring on the tail. Hens may also have slight yellow flecking on head. Males lose tail barring and get a yellow head.

Body is covered with a unique pattern of spots. Females retain pearls throughout their lives. Males lose most pearls with their first molt. Eventually they will lose all of them until they look just like normals.

Birds produce no melanin. This means only their orange/yellow pigmentation shows. Lutinos appear yellow-white and still retain their orange cheek patch. They have red eyes. 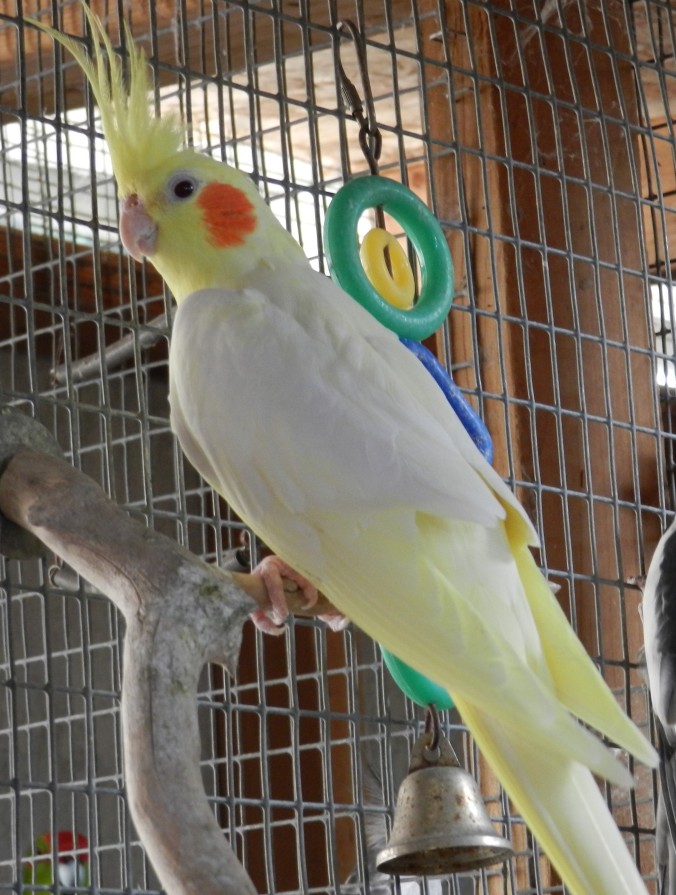 Lutino is always a popular color.

The opposite of lutino, these birds produce no carotenoids. They retain their grey but have no yellow or orange hues. In adult males, the face will be white instead of yellow. Females will have a grey face.

Adult male whiteface (left), lutino in the back.

Albino is actually a combination of whiteface and lutino. These birds produce no pigment and are completely white. Due to the lack of melanin they have red eyes.

Pied birds have patches where pigmentation is missing. Where the patches occur is highly variable and no two pieds are alike.

This gorgeous hen is pearl, pied and cinnamon. Her pied patches are also symmetrical, which I find particularly nice in pieds.

Birds that carry only a single copy of the pied gene will usually have stray white or yellow feathers in certain locations–the nape is very common, but it can also be a single lighter toenail or wing feathers.

These birds have yellow cheek patches instead of orange.

Regular cheek patch on left, yellowface on the right. These birds are also silver and pearl.

These are two different mutations. Both cause the normal grey to have a muted, softer brownish tinge. Fallow tends to be slightly more of a yellow brown, and the eyes can have a reddish tinge (though not completely). I haven’t worked with fallow so I only have pictures of cinnamon.

Both adult these males are whiteface. The cinnamon is on the left. Note how it is softer grey but also has a brownish hue.

Silver is caused by multiple genes and affects the grey coloration. How much the grey changes depends on the genetic makeup of the bird. It basically causes a lightening of the grey, but without the brownish tones of cinnamon and fallow.

Notice how the grey is muted. This bird is silver, pearl, and yellowface.

Here is another source if you’d like to read more.

© 1997-2016 by Karen Trinkaus. May not be reprinted or used in any way without the author’s permission. Yellowface, silver, and albino images reprinted with permission from Pam Bowman.