“How do you know the sex of that chick?”

I post a lot of chick pics and videos on my Facebook page. Many times I will identify a chick as male or female, sometimes as soon as it has hatched, and I inevitably receive this question. The answer is sex-linked genes.

I strongly recommend checking out my more in-depth article on bird genetics before delving in here. This article is a more cursory look at sex-linked genes.

What is a sex-linked gene?

Sex-linked genes reside on sex chromosomes. If you have a gene sitting on the Z chromosome and that bird is a female, there is no corresponding Z chromosome to block out the gene. It will be expressed.

Look at this punnet square of two birds. Visually, both male and female in this pair look normal. However, the male carries a sex-linked gene (shown here in orange) on one of his Z chromosomes. It’s hidden by the fact that he has a corresponding Z chromosome without the gene.

Punnet square of a male carrying a sex-linked gene and a normal hen.

The squares in the middle show you their babies. On the right, you have a normal male (ZZ) and normal female (ZW):

On the left, you’ll see that half their babies carry the sex-linked gene. One, the male (ZZ) will look like his father. He will carry the gene without expressing it (this is known as “split”).

The female (ZW) has no corresponding Z to counter the Z chromosome carrying the gene. She will VISUALLY show the gene.

Females cannot be split to sex-linked genes because they have no corresponding Z chromosome to block it out.

This makes it incredibly easy to sex babies in the nest, so long as you know the genetics of the parents.

Which genes are sex-linked?

This list is not exhaustive, but here are the most common. Sometimes mutations have different names depending on the species. For instance, in green cheek conures, opaline/pearl is called “yellow-sided.”

This cockatiel has two sex-linked genes: cinnamon and pearl.

Rules for Sexing by Sex-Linked Genes: 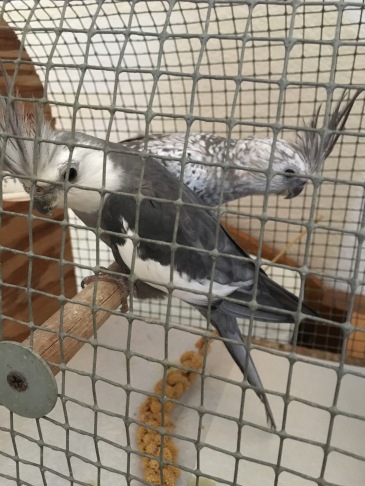 In some cases, you can sex as soon as the chicks hatch. Cinnamon, lutino, and pallid all create lighter-colored eyes. The chicks below are the product of a visual pallid male and a violet female. Pallid is sex-linked, and since the mom is not pallid, we can sex all the offspring using rule #2. All pallids from this pair will be female (hatching with red eyes) and all “normal” (blue or violet) babies will be male (hatching with dark eyes). 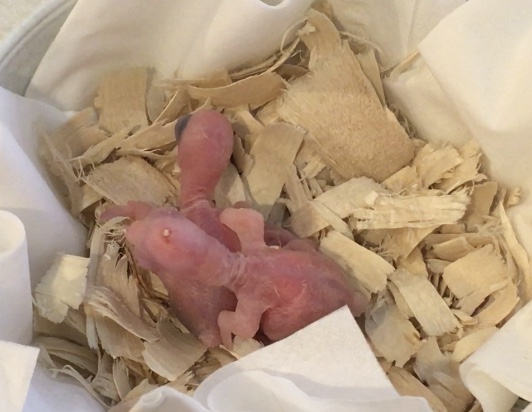 Knowing how to sex with this method saves time and money, as you won’t have to wait for birds to molt into adult colors or send out for DNA testing. It’s also more accurate. But you have to know the mutations of your birds.

*Chromosomal anomalies do exist. People can be born with extra chromosomes (sometimes lots of them!) and outward biology does not always match internal chromosomes. Nature is nothing if not complicated.

This article and all of its images are ©2020 by Karen Trinkaus and may not be reprinted or used in any way without the author’s permission.