I was at the vet getting a button quail treated. Dr. Levoy walked in and told me he had a lady in the lobby looking to get rid of a conure. After my appointment was over I found her in the lobby. She was a younger woman, late twenties or early thirties, and was carrying a newborn baby. She explained that she had a mitred conure she was trying to find a home for. It had been in her care for six years. The fact that she’d just had a baby and her husband hated the bird’s noise had forced her to get rid of it. Right now the bird was staying at her parent’s house. Apparently the bird took many such “vacations” to appease the husband. I gave her my phone number and she said she’d call as soon as the bird was back at her house. After a few weeks and no call, I virtually forgot about the incident.

About six weeks after the chance meeting, I got a message on my answering machine regarding the conure. Was I still interested, and if so would I call back and arrange a time to see it? I called her back and agreed to come view the bird.

The bird’s first owner was a woman who’d caught him outdoors. Apparently he’d been dive-bombing some gardeners. He stayed with her a year and then was given to her friend, the woman I’d met. She in turn had had him for six years. The conure was also open-banded, probably with a quarantine band. Considering the history, it was at least eight years old if not more.

I wasn’t expecting much when I arrived at her home. I kept envisioning a bird in a small, dirty cage, with poor plumage and a fierce bite. Imagine my surprise to find a very healthy-looking bird. It was bright-eyed and alert and had excellent plumage. I scanned the cage. It was much too small, but at least it was clean. On top was a T stand, bathing dish, mirror and a single wooden toy. Inside the cage the conure eyed me warily. The woman let him out. I didn’t approach him but instead asked a ton of questions regarding his background.

His owner actually knew quite a bit more than most do. She knew she had a mitred conure. She’d read up on the proper diet but had been unable to convert him. The bird had become so picky that it would eat nothing but safflower seed, white bread and apples (no skin). She said he liked to hang out on the T stand by the mirror but would also climb down the cage and wander around the floor. Among her reasons for getting rid of him was her fear that he would hurt the new baby. He also wouldn’t be receiving as much attention. And of course there was the husband, who’d nicknamed the conure “Butthead.” After spending a good hour probing with my questions, I decided to take him. The bird came free with cage, T stand, mirror, toy, bowl and seed. Had it not appeared so healthy I would not have taken it.

On the ride home my new bird was rather nervous, but let one good shriek loose. Damn, he was loud.

I renamed the bird Fry. My influence for the name came from two sources: the movie Pitch Black and TV show Futurama. Both have characters by that name, the latter in which the character is a redhead. Aside from these sources, I’d never even heard of that name. “Fry” just had a certain ring to it that appealed to me.

The first thing I learned about Fry was that he didn’t like hands. Aside from that he was fairly tame. If you offered him a finger he’d scramble to get away; if you offered him your arm he’d hop right on. Despite being the largest bird I’ve ever owned, he’s also a strong flier (or jumper) when clipped. I placed his cage on top of my dresser which, unfortunately, had a built-in mirror. The cage was still too small, but it was all I had at this point. 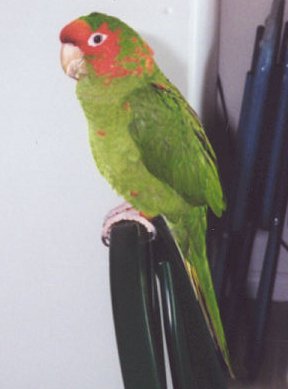 Jay-Jay also shared my room with Fry and helped me break his finicky eating habits. If I can get a bird that ate nothing but apple, white bread and safflower seed for six years to eat whatever I offer, YOU can get your birds on a healthy diet. Fry’s owner had tried to get him on a better diet, but he refused to eat anything but the above listed items. I got him eating anything in two weeks.

Jay-Jay’s cage was across the room from Fry’s. Every day I cooked up a meal for the two of them after I got off work. Both dishes were the same style but varying colors. Jay-Jay always dove right for the food. Fry wasn’t stupid. He knew that whatever Jay-Jay was eating in her bowl was most likely the exact same thing in his bowl. It not only seemed edible, but delicious. Jay-Jay could hardly contain herself when she saw the bowls coming. The second day after offering food in this manner, Fry started picking at whatever was in the dish. I mostly fed Crazy Corn, birdie bread and veggies. Every few days or so I’d offer apples too.

In addition to using Jay-Jay as a model, I also used myself. Some time in the afternoon I’d make myself a meal, usually fried eggs and toast or slices fruit, and bring the birds into the kitchen to share it. Fry was nervous around me and the new room so I started out by placing him on the back of a chair across the table while Jay-Jay and I ate. After a few days Fry would jump onto the table and cautiously sneak some food before scurrying back. The toast tempted him more than anything. Jay-Jay always went for the egg yolk.

A quick aside on sharing foods:
Give birds their own food to eat. Do not allow them to eat anything your mouth has touched. Mammal bacteria can be dangerous for birds and human mouths in particular are bacterial cesspools. Likewise, try not to eat anything they’ve picked at or stepped on. Though it is unlikely you will catch anything, you still don’t know where those birdie feet and mouths have been. How many times have you seen your bird chewing its own dried feces at the bottom of the cage? Always practice proper hygiene with animals.

Fry had a mirror for six years. When I first adopted him I continued to allow him access to it on top of his cage, but draped a towel over my dresser mirror. What more harm could it do?

When he was out of the cage he spent of time just sitting in front of the mirror. He never touched a toy, but took great delight in flying across the room to torment Jay-Jay. He would barge into the cage to eat her seed while she hid inside her Happy Hut.

Fry was downright hostile towards most birds. Jay-Jay seemed to be an exception, maybe because she was larger and a conure as well. Once I had to hospitalize a breeder tiel in the same room. I left for literally a few seconds to fill the water dish when I heard shrieking. I ran back to my room. Fry had flown across the room to the tiel’s cage, pulled its leg through the wire and was in the process of shredding it. The poor bird was already ill and now had to deal with this trauma. I believe it died that night. Embarrassed and ashamed, I brought the poor thing in for a necropsy, making sure the vet knew the leg had been injured post-illness. The results revealed that the cockatiel had been ill due to gout, something I couldn’t have done anything about. I still felt awful about the incident though.

After that I took Fry’s mirror away. He quickly chewed a hole in the towel covering my dresser through the cage bars. A huge hole. Now he didn’t even want to come out of the cage that often, except to harass Jay-Jay. Eventually I re-covered the mirror with a new towel and moved the cage an inch forward, hoping this time it would be out of reach. It was. Fry began to play with his toys. He also started perching on the back of my chair when Jay-Jay and I were at the computer.

Fry lived with me for several years in an upgraded cage with lots of toys. He eventually died from leukemia.

One thought on “Mitred Conure: Fry”